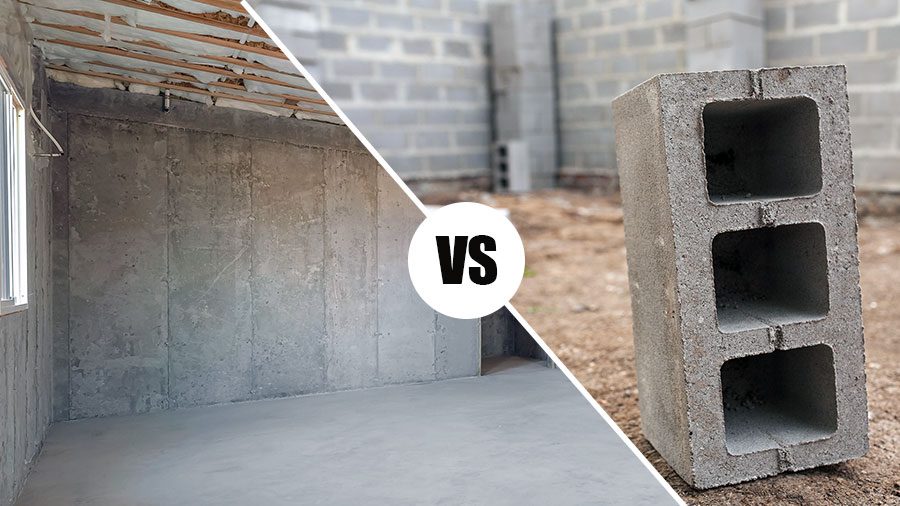 If you’re considering a pre-construction home today, it’s likely poured concrete. Let’s take a look at the pros and cons of both concrete block and poured concrete:

When was concrete block used?

As mentioned, concrete block foundations have been around for a while. They’re still used today, but are not nearly as popular as poured concrete. If you don’t want a concrete foundation, be sure to mention this to your Guelph real estate agent.

Although it’s tough to say when they started to come into use, concrete blocks generally began appearing in post war houses. These would be from the late 1940’s to the early 1970’s. You could say it was a prevalent foundation type for that era.

Within the 519 area code of Guelph, these homes would mostly be located around the downtown core. Neighbourhoods such as Riverside Park, General Hospital, Onward Willow have many examples. (related: see this neighbourhood post using realtor maps)

Prior to concrete block, homes could be built from a variety of styles and materials. This includes mainly stone/ rubble foundations.

Is cinder block the same as concrete block?

No. Cinder blocks are light-weight low-density building blocks made of cement and coal ash, hence the name. Concrete blocks combine cement with sand and gravel, and a small percentage of cinders.

Cinder blocks are the typical hollow building blocks you’d think of. As a result, they lack the strength and resistance to weather and pressure that concrete blocks possess. Most contractors won’t recommend them for many load-bearing jobs. Cinder blocks are ready-made and available off the shelf from big box stores. The blocks are easy to store and transport to a site.

A drawback found in a cinder block wall foundation

They are more likely to suffer issues like buckling and bowing because of the number of joints between blocks that can shift. Buckling and bowing are a result of either poor construction or underground lateral water pressure. Thus, repairing them can be quite expensive, depending on the extent of the damage. Cinder blocks are best for interior, non load bearing walls.

Another draw back to concrete block foundation is that cinder blocks are more prone to water leaks because of the number of joints between each block. The cores inside the blocks can also fill with water, saturate the blocks, and create dampness inside basements. As Carlos Trejos mentions, puddling or pooling water near the foundation is a serious indication that something is wrong.

Concrete blocks on the other hand, are more common as foundation bricks. Concrete blocks prove to be fire and weather-resistant, applicable for walls, floors, ceilings, commercial structures, and silos. They also provide heat and sound insulation properties and long service life.

The majority of time, concrete blocks are solid bricks which makes them stronger and more durable.

If you’re considering a house with a concrete block foundation, you may want to see what options exist for future renovations as well. Sometimes, you can upgrade or replace.

How much do concrete blocks and cinder blocks cost?

The cost for a cinder block or concrete block is roughly $1-5 each. There are a variety of factors that influence the price, including where you live and the quantity you’re purchasing. Note that these costs are purely to buy the materials. It costs about $3000- $5000 to build a 25′ wall.

Poured concrete walls are a lot stronger than cinder block or concrete block walls. They don’t have joints like the ones found between blocks. The only joint found in poured concrete basements is the cove joint. This is where the floor meets the wall, and the wall sits on top of the footing.

Poured concrete walls have excellent resistance to underground lateral pressure imposed by the soil and water. As poured wall do not feature joints like in a cinder block wall, and it is less prone to leak years after construction. There will be resistance against premature leaking or cracks.

During the construction phase, poured walls can pour onto any foundation, including those now used in condos and duplexes. If uncertainty abounds during construction, it is the preferred method for last-minute changes. Poured concrete walls are not restricted to the same limitations as cinder blocks. Concrete can pour into any shape and size.

Poured concrete is much quicker than concrete blocks as you have to lay the blocks individually.

On the downside, poured cement walls can be more expensive than block walls when cement prep and production are far from the site. It is something to consider when building a home from scratch.

The other thing to consider is the way poured concrete is done. You’ll need to have the space for a concrete truck to come in to fill the molds or extra machinery and/or equipment could be pricey.

Which is better? Concrete block or poured concrete foundations?

Even though poured concrete foundations have become the new norm, this does not mean that concrete or cinder block foundation is something home buyers should stay clear of. Provided the foundation was constructed properly and there has been no significant damage, there is nothing to worry about.

For both types of concrete-based foundations, there should be another major component: steel. Although concrete alone is strong, it has strength primarily when compressed. Concrete’s compression strength is great, but it lacks lateral strength. Concrete cannot bend and stretch (or expand and contract) as the earth below it does, without cracking (and making your home unstable). Concrete used alone in a foundation, fails in the lateral strength department.

Without reinforcement in key areas using steel rods, along with properly configured and placed concrete footers, your concrete foundation would fail. That is true whether your foundation starts out with concrete blocks or poured concrete.

Here are 3 essential ingredients to ensure a strong built foundation:

Beth and Ryan always recommend a home inspection before purchasing, as this would help identify if there are any potential issues with the foundation.

If you have any additional questions, don’t hesitate to reach out to Beth and Ryan, Guelph Realtors. They would be more than happy to answer all your questions!

Buyers and sellers of houses for sale in Guelph who casually (or obsessively!) browse MLS listings have likely noticed one thing: things are changing. It hasn’t been a buyers market for any long period of...
Read more
June 12, 2022

What is a conditional offer in real estate?

It’s almost crazy to think that in early 2022, a conditional offer was cringe-worthy. Sellers were listing their homes and waiting for the offers to come in on offer day. This was referred to as...
Read more
May 18, 2022

Guelph Realtors Beth and Ryan Waller talk about rising Guelph Real Estate listings. From 25 houses in early January to 296 in late May, a 10x increase in inventory has impacted the market pricing. Only...
Read more